I’ve had a series of unfortunate events happen to me 36 hours prior to my trip to São Paulo, Brazil:

The day before my trip, I get an email from my bank saying they’ve found suspicious activity of fraud on my debit card. As a result, they’ve suspended my card and limited all my transactions to only $100. Naturally, they need to send me a new one — which will arrive 4 days after I return from my trip. God fucking dammit.

Next, as I left the subway from work a few hours before my scheduled flight, an elderly woman taps me on the shoulder: the teenager behind me threw up all over my back, including the jacket I was going to bring and my work bag. Since it was St. Patrick’s Day, I assume he was drunk. I had to rush home, wash and dry my jacket, and scrub puke off my bag. Of all the millions of people in NYC, of all the inconvenient times, today I was someone’s barf bag.

Thirdly, when me and my friends arrived at the airport, minutes before boarding the plane at 10:30pm, we were all alerted that our flight was delayed till 9am the next day. And why? Because the pilot did not show up. Luckily, they put all of us up at a nearby hotel and rescheduled the flight for 8am the next day,  but not before waiting in line for two hours with a mob of other angry customers complaining to American Airlines and trying to get compensated. My friends and travel buddies Brett and Clayton tweeted to American Airlines, only to get immediate responses and travel vouchers. I, of course, tweeted as well to try and get a voucher, also explaining the shitty and unfortunate events before this trip. I got this response:

The next day, we returned to the airport. After going through security and putting my jacket back on, my phone falls out of my pocket. Just because fate likes to shit on people going through an already shitty time, of course my screen had to shatter: 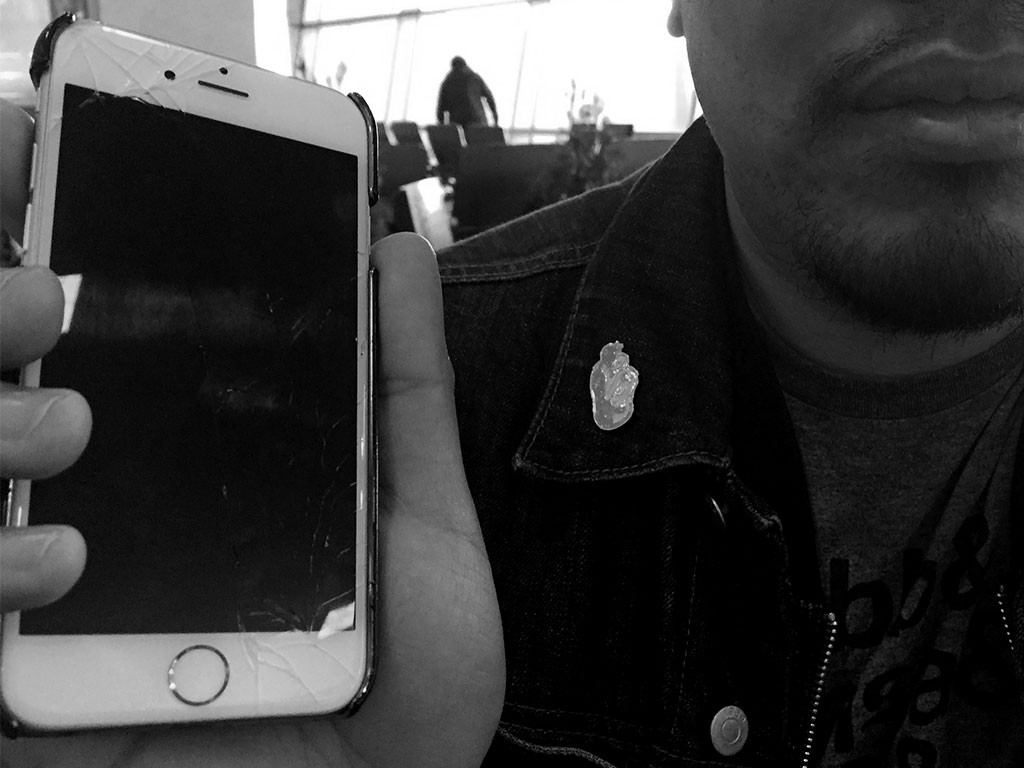 And that 8am flight was delayed and pushed back to 12pm. Yup.

Indeed, it was a clusterfuck of events that would send a person into a mental breakdown or an uncontrollable rage: suspended credit cards, being thrown up on, a broken phone, and a flight delayed twice. Still, since this was all random, I can’t help but laugh (while complain, mind you) of how so fucking, goddamed unfortunate a person can be before a vacation short of getting hit by a bus or having their hair set on fire. The series of shitty events seemed so comedically theatrical that I thought, “if God was a writer, I’m in an episode of a sitcom.”

For the most part, though, I believe in karma. I know that everything will balance itself out, and I’ll have an excellent time in Brazil — tipsy on Caipirinhas, laying by the pool, and soaking in the Latin American sun.

I love over-thinking the simplest of things and making stuff at every waking moment: comics, food, videos, photos... you name it. This blog is a record of my work, my exploits, and my philosophical, political, and psychological ideologies. So enjoy reading my dumb ideas and inane rants that I'd otherwise be ashamed to verbally speak out in public.